THE REPUBLIC OF GHANA 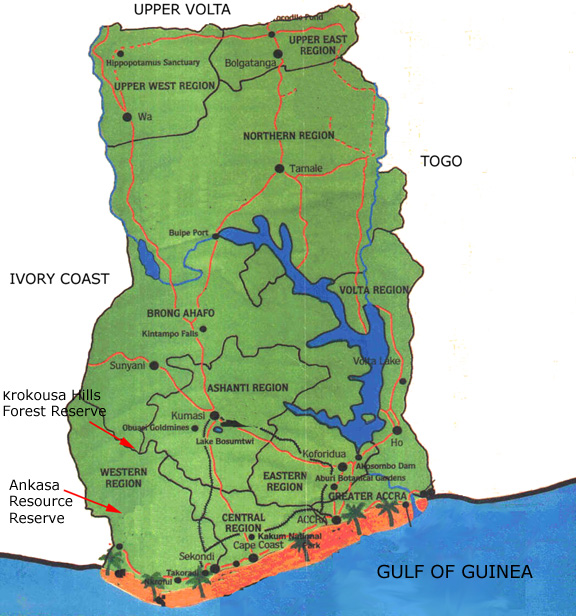 The Flag of Ghana

Ghana is located in the western part of the African continent, bordered in the north by Burkina Faso,to the west by Cote d'Ivoire and the east by Togo. To the south lies the Atlantic Ocean.


The climate in Ghana is typically tropical. The temperatures are hot and humid especially in the North. There are four distinct seasons with two rainy seasons from March to July and September to October with the former experiencing heavier rains. Other months are largely dry but slight rains can be experienced throughout the year.

Ghana practices a multi-party democracy. It gained independence on 6th March, 1957 from Britain. It has an executive presidency, and an independent legislative and judicial system. The president and the legislators are elected every four years.

Next election will be in December 2012.

Legal system is based on English Common law and customary law.

Head of State and Head of Government:

Overall, Malaysia enjoys good relations with Ghana based on a long history of engagement, commercial and trade engagement as well as continued interaction at the international fora including the UN, NAM and the Commonwealth. Malaysia established diplomatic relations with Ghana in 1967 and in 1997 both countries set up their missions in Accra in May and Kuala Lumpur in July respectively. Exchange of visits at highest level,importantly the visit by President John A. Kufuor to Malaysia in 2002 presented an opportunity to establish contact and rapport between the leaders of both countries which in turn contributed to the strengthening of relations.

After over 40 years of good relations, both Malaysia and Ghana have developed mutually beneficial relations that are manifested in the fields of economic,trade and investment and education and human resource training. In the early  1990s, both the two countries have signed three bilateral agreements and one MoU namely the Trade Agreement; the Economic,Technical, Scientific and Cultural Agreement; the Agreement on the Promotion and Protection of Investment; and the MoU on Information Cooperation.

It is noteworthy that bilateral trade between Malaysia and Ghana , although small but on an increase. Total imports value from Ghana in 2008 was approximately RM5.7 million while exports remained around RM5.8 million compared to RM 4.3 million andRM 4.11 million in the previous year. The main imports from Ghana among others comprised cocoa;processed food; iron and steel products; and wood products. Ghana's imports from Malaysia comprised palm oil; ,isc.edible products;dairy products;furniture; clothing; power generating machinery; electrical machinery; and beverages and general industrial machines.

In line with the spirit of South-South Cooperation, Malaysia has been providing training courses for Ghana citizens under the Malaysian Technical Cooperation Programme (MTCP) in areas where the former has the experience and expertise such as public administration, agriculture, poverty alleviation, investment promotion, ICT, banking, English language and diplomacy and education. Since the inception of the MTCP in 1985, more than one hundred Ghanaians have been trained in Malaysia in various courses.In 2009, 8 Ghanaians have received training under MTCP.

On the International front, Malaysia and Ghana shared many common views on various international issues of mutual concern. Malaysia is grateful to the Government of Ghana for its support in the past to our candidatures at the international fora especially in the NAM and the Commonwealth.